The most difficult, and frustrating, part of raising a child like Carson is the uncertainty of it all. We never know what each new day will bring. I always joke that Carson likes to play tricks, but it’s true. We feel like we maybe get a handle on one problem, and he throws another one at us. Carson spent most of 2016 working harder than anyone should to breathe. In November he had surgery on his airway to help him breathe more comfortably. We felt like we had finally made progress. One step forward. Before the month was over he had an 18 minute seizure, and of course neurology had no idea why. Two steps backwards. Thankfully, with seizure medication he has been seizure free since. One step forward again. Fast forward to today..

Carson has struggled to gain weight his entire life. We had the fun summer of putting NG tubes down constantly, we got his g tube, we have tried numerous formulas and ways to increase his calories, and he has had surgery to “keep him from throwing up” (*insert sarcastic giggle here).  I have changed his feeding regimen more times than I can remember in hopes of finding something that worked. It takes close to half an hour every morning just to mix and set up his feed after I add vitamins, salt, and calorie boosters that are all calculated down to the milliliter.

In January Carson stopped tolerating any bolus feeds. Instead of feeding him several times a day, he now eats at a slower rate 24/7.  Since we stopped bolus feeds he has only thrown up a handful of times. However, he has lost three pounds in the last month. In February Carson weighed over 25 pounds (the most he has ever weighed is 26 pounds). Today he weighs 22.4 pounds. In true Carson fashion, nobody understands why he is losing weight so quickly.

We are fortunate enough to live in a country where we have access to plenty of specialists and more than enough food to sustain Carson. The childhood obesity rate is skyrocketing, but Carson has bruises on his spine from supporting his own weight without the cushion of fat and muscle. We have someone who makes a living off of calculating and writing diet plans for kids like Carson, yet here we are. This is the frustration. Although it seems like we have everything we need, we are still missing a piece of the puzzle. And no one seems to be able to find it. 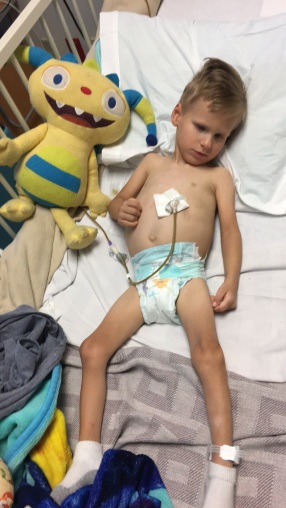 One thought on “Tiny, but Mighty.”